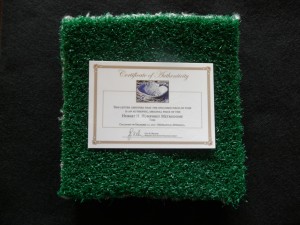 Minnesota Vikings, Minnesota Twins and Minnesota Gophers all played on this actual turf from 1987 through 1993

1992 Superbowl was played on this turf (Washington Redskins)

3"x3"  piece of astro turf does not include case

Comes with a Metrodome Milestones and History Sheet

Awesome piece of Minnesota Sports History that many Hall of Famers, All Stars and World Class athletes have played on!